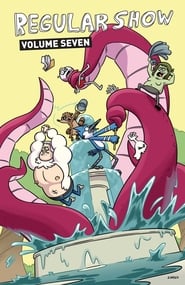 The seventh season of the American animated comedy television series Regular Show, created by J. G. Quintel, originally aired on Cartoon Network in the United States. Quintel originally created the series’ pilot using characters from his comedy shorts for the cancelled anthology series The Cartoonstitute. He developed Regular Show from his own experiences in college, while several of its main characters originated from his animated shorts The Naïve Man from Lolliland and 2 in the AM PM. He himself voice acts one of the main characters in the show, “Mordecai”, a blue bird. The series was renewed for a seventh season at the 2014 San Diego Comic-Con International on July 25, 2014. The previous season contained 31 episodes in order to accommodate for the film and this season will contain the regular 40 episodes from the previous seasons.